NEST – The next generation of thermostat for your New York Brownstone.

Posted by Chris
No Comments Check out this new affordable NEST thermostat. It would be a fantastic addition for your brownstone home, lowering your heating and cooling bill up to 20%. Sometimes people leave their brownstone home and accidentally leave their thermostat at one temperature and forget to change it. Worry no more, NEST learns your schedule and programs itself and automatically turns to an energy-efficient away temperature when you are gone. At least 99% of NESTs have a schedule. Also, you can control NEST from your mobile Iphone or android phone by simply downloading the NEST app. This is a great option for any brownstone landlords. This is the best thermostat that saves energy and cuts costs for your brownstone home.

To find out more about NEST click here. http://www.nest.com/

The Architect for this project Jeremy R. M. Shannon (Principal of Architect) of Prospect Architecture, PC has created The New York Passive House (NYPH) Meetup. This Meetup is a social gathering that allows New Yorkers to learn more about the Passive House building standard and meet others interested in working with the Passive House standards. We are proud to announce that Brooklyn’s first Passive House renovation is nearing completion.  All Renovation is the lead General Contractor on this historic project. Passive House standards promote healthy, comfortable and energy efficient built environments. This revolutionary concept has only recently spread to the United States, where it is gaining devoted followers among green building enthusiasts.

The passive house concept — which can cut the amount of energy homes consume by up to 90 percent — has the power to dramatically reduce energy bills and global carbon dioxide emissions.What’s more, it has the potential to be quite affordable. The cost to build a passive house in Germany, for example, where standard features like triple-pane windows with foam seals and multiple latches are readily available, is only about 7 percent more than the cost of building a standard home.

The trade-off is that you put money you would have spent on a state-of-the-art heating system into the home’s exterior shell, or “structural envelope.”

Several architects have already embraced the movement’s strict code of construction that allows extremely little air leakage — less than one air change per hour. (By comparison, an Energy Star-rated home allows up to seven air changes per hour).

Here  is what is required to construct a passive home:

Super-insulate and make it airtight. Buildings are encased in ultra-thick insulation that acts as an airtight shell. This prevents warm air from escaping and cold air from entering the home, thanks to 10-inch-thick walls, triple-pane, argon-gas-filled windows and elaborate airtight seals around each window and door opening.

High-performance windows and doors. In addition to triple-pane, foam-sealed windows, there are also prefabricated walls that are insulated to passive house standards. These products are much more affordable in Germany, where they can be purchased off-the-shelf.

Eliminate thermal bridges. Homes are designed so that wood framing does not provide a conduit for cold or heat from the outside walls to be transmitted to the home’s interior.

Optimize passive solar and internal heat gains. Passive homes also take into account the amount of “free” heat that residents and household electrical appliances create. Careful siting also enlists other passive solar energy sources, such as south-facing windows and the thermal mass of the building itself.

Heat recovery ventilation. The key to indoor comfort in passive homes is a central ventilation system that is widely used in Europe but still relatively unknown in the United States. As warm, stagnant air is expelled through the heat recovery ventilator, it passes by incoming streams of fresh, cooler air, allowing the heat to transfer without mixing the two streams of air. As a result a passive house loses very little heat and then recycles it.

The Architect  for this project Jeremy R. M. Shannon (Principal of Architect) of Prospect Architecture, PC has created The New York Passive House (NYPH) Meetup.  This Meetup is a social gathering that allows New Yorkers to learn more about the Passive House building standard and meet others interested in working with the Passive House standards.

Meetup members include contractors, home owners, architects, engineers, developers and people simply interested in finding out more about Passive House. The next Meetup is scheduled for August 8, 2010.  Please register for this Meetup here today!

Planning to Repaint? Read This First

Posted by allrenovationllc
No Comments 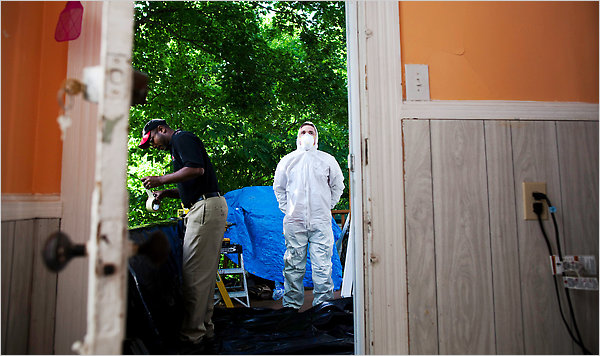 Photo by Christopher Capozziello for The New York Times

HOMEOWNERS and contractors considering renovation projects are grappling with the impact of a new Environmental Protection Agency regulation designed to shield children from exposure to lead paint.

Since April 22, all professional renovation projects in apartments and homes built before 1978 — the year the use of lead in paint was banned — that test positive for lead have had to meet federal guidelines and be performed by workers certified in lead-safe practices. Many older apartments in New York, remodeled more than once over the years, have long since been divested of their lead paint. But in a number of cases, contractors said, complying with the new rules could more than double the cost of renovations.  Read More

Posted by allrenovationllc
Comments Off on How Homes Become Green

As the “green” movement gains momentum, homeowners want more details about green construction. Here’s a bird’s-eye view of a home that contains many features — from more durable roof coverings to insulated foundations of sustainable building elements. You can get more information at the NAHB (National Association of Home Builders) website. Make sure to click on the Green Building section.

When Hiring a Contractor – Nine Questions to Ask

Please do you homework. Don’t let your dream home become a nightmare!

Thinking of renovating your property? Take a minute to fill out our contact form so that we may better understand your renovation needs. In return, we will respond to your request, within 1-2 business days, and get the ball rolling.